After one month and two days, I feel like I can say with some authority that downtown Annapolis is perhaps the most beautiful place there is.

This morning I drove downtown to find a Starbucks and a park, and perhaps a walking path on the water. I found all that, but also so much more.

There was an impressive generational mix—grandparent types strolled hand in hand down the brick streets, while moms around my age (give or take) pushed their children around in strollers and sipped lattes. The air was calm. I saw almost no cell phones at all. I did see ample street parking, people conversing happily, and too many 30-something women and their tag-alongs to count.

I pulled into a parking spot directly in front of Starbucks. I went in and found myself—at 9am—only the second person in line. The cashier and I spoke cheerily of hummus and cucumbers, and he graciously forgave Aaron for throwing reusable Starbucks mugs on the floor. On the way out, I accidently bumped into a woman. In response to my apology she said:

“You are a magnetic person, and a wonderful child of God. Don’t apologize, be glad.”

Between that and my first pumpkin spice latte of fall, the tenor of my day was set.

I prepared to walk a mile to a playground I had passed earlier, but to my happy surprise I found a mostly fenced, well-shaded park with fantastic play structures just a block away. It was on the water and the state capital was visible on the horizon as I watched Aaron play. It was peaceful, beautiful, calm.

As is the case at almost all parks, the mom brigade began to trickle in around 10am.

At first there was only one mom, accompanied by a 3-year-old and a newborn. She was friendly. She had moved here a year ago. She was happy. We talked, and I was excited at the prospect of a park-born friendship. Sadly, as the other moms and tots strollered their way in, she drifted away towards them and they all gathered together—they were a group of women from the neighborhood. Apparently the park meeting was a regular thing.

Our children played together, and everyone was pleasant, yet… there was no overt attempt at inclusion in their group. And who could blame them? They wanted to chat about where to get the best deal on kids’ pants, how one woman’s husband would be out of town all weekend, while she had the kids, and other various things. This was their time, their very, very precious time, carved out to give them that extra boost to make it through their day.

I wasn’t disappointed in the lack of love-at-first-park-sighting. Instead, I felt hopeful. Hopeful because I live in a town with a lovely mix of generations, but with a heavy dose of married-with-kids. Hopeful because there is so much to do, parking is cheap and easy, and traffic is typically light (but don’t ask me about Friday afternoons…).

In the hot tourist-full days of summer or the freezing months of winter, I may feel differently than I do at this particular endorphin-filled moment. But for now… for now I am full of gratitude that this crazy life season may be beginning to slow down, to bear fruit, and to give a little breathing room.

Andy works late tonight, so I know this day will drain me. I will likely snap more than I mean to, and eat more chocolate than I should. But for now, I feel full: this place might just be okay. 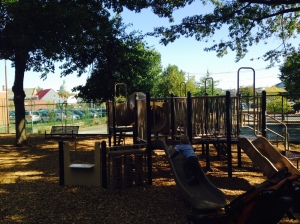