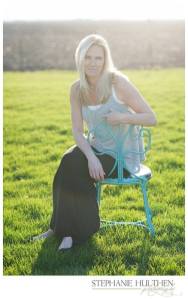 I am happy to have a guest post today from author/speaker Elisabeth Klein Corcoran.

Elisabeth’s new book, Unraveling: Holding on to Your Faith through the End of a Christian Marriage (Abingdon), was released earlier this month.

Things I Couldn’t Do

Someone recently emailed me to say that she is in a difficult marriage and is in ministry and doesn’t know if she’ll be divorcing but she was encouraged to see on my speaking page that I have a full schedule, so people must not have dropped me like a hot potato just because I was divorced.

She doesn’t know the backstory, which is this.  (But before I say what I’m about to say, I need to first say this: I was treated 95% well by Christians through my divorce, and I will be forever grateful for those who stuck by my side. However…)

When I announced my separation, I was oozing shame.  I was beyond embarrassed.  I was full of guilt.  I would write an email to another round of people telling them the news, hit send, and then go run and hide in another room so I wouldn’t have to see the responses as they came in.  And if I had thought that the hardest part of telling people would be the occasional inappropriate comment, I was mistaken.

I soon realized that some people thought there were certain things that a divorcing woman should no longer do, until further notice.

I lost speaking engagements almost immediately, even one for a Christmas talk, because apparently divorcing women are either not allowed to celebrate the birth of Christ or wouldn’t know how to give a Christmas talk without bashing their soon-to-be-ex-husband while ruminating on the wise men. (“And while we’re on the subject, let me tell you about a man who wasn’t wise…” Really?!)

I couldn’t host teenagers in my home. Which made me doubt my mothering. Because I had two teenagers.  If my home is not fit for other teenagers – just to hang out in – is my home not fit for my own children now that I am divorcing? I cried.

And I needed to steer clear of a couple women in precarious marriages so as not to guide them down the wrong path with my counsel.  (My counsel being things like, keep reading the Bible, and keep working the steps, and stay in counseling, and don’t be disrespectful.  Controversial, marriage-hating stuff like that.)

Not one of these things that I was told I could not do was under the guise of, “We think you need time to heal.”  Had that been the case, I would’ve embraced the kind support and leaned into it and felt taken care of and looked out for.

No.  Instead, these rules implied one thing: people needed to be protected from me because I was sinning (I guess) and my divorce was apparently potentially contagious.

Women in my audiences might learn a quiet time tip only to find out that I was divorcing which would make it completely invalid.

Teenagers might get the impression that my situation was “okay”, something they could replicate in their future. God forbid someone get served with divorce papers in fifteen years; we can’t send the message that they’d make it through.

And those gals in hurting marriages might leave because I was left.

I guess.  I mean, I don’t really know.  Because it was never fully explained to me.  Except that it was clear – it wasn’t about protecting me; it was about protecting everyone else from me, the sinner.

I’m sounding bitter.  I am.  No, I’m not.  I have gotten over these specific things.  But I’m not over the message that was sent to me.  And I’m actually okay now with learning it because what this taught me was that Christians don’t always know what to do with those of us who are hurting, grieving, maybe sinning, maybe bouncing back from the effects of someone else’s sinning against us.  I know this to be true, because I used to be a staunch, rule-keeping women’s ministry director who didn’t have time in her schedule for messes like this or room in her heart for the grace to cover it over.

But now I’ve been through the fire.

I doubt I’ll ever lead a ministry at a church again…but if I do, I know I will handle the hurting ones much differently than I was handled, much differently than I used to handle.  I will ask what they need.  I will ask if they need rest, protection, a covering.  If they do, great.  I will give it as long as they need it.  But if they don’t – if what they need is to keep serving so they can get out of their own heads for ten minutes or to keep plugging away so they can pour out some of the comfort they’re receiving from God – and it truly doesn’t seem like it will hurt anyone, then I would let them.  God, I would let them.  I wouldn’t add to their shame.  Because I know they’re already carrying around a lifetime’s worth and even one more drop could send them over the edge.  Because I know that what she would really need more than anything else is support and love and grace. And that’s what I would give her.

Elisabeth Klein Corcoran is the author of Unraveling: Hanging Onto Faith Through the End of a Christian Marriage, along with several other books, who speaks several times a month to women’s groups, and is a member of Redbud Writers’ Guild. During her time at Christ Community Church’s Blackberry Creek Campus in Aurora, Illinois she began and led their women’s ministry for ten years prior to moving to the city’s Orchard Community Church. She lives with her children in Illinois. Visit her online at http://www.elisabethcorcoran.com/difficult-marriage-divorce/ or https://www.facebook.com/ElisabethKleinCorcoran.  She is the moderator of two private Facebook groups: one for women in difficult Christian marriages, and one for Christian women who are separated or divorced. Email her at elisabethkcorcoran@gmail.com if interested in joining.
Unraveling can be purchased at Amazon: http://tinyurl.com/po3ek2w.

What do you think? I would love to hear your thoughts! 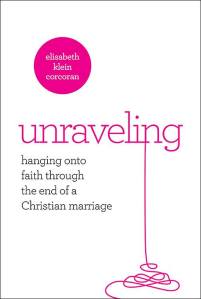